Skip to main navigation
Delivering Value To Those We Serve

First quarter 1998 revenue resulted from research and development payments in connection with development work with Bristol-Myers Squibb ("BMS") and the R. W. Johnson Pharmaceutical Research Institute, a Johnson & Johnson unit ("J&J"). "As previously disclosed, DepoMed has completed most of the technology transfer to BMS for the manufacture of their drug in DepoMed's Gastric Retention System.," said John F. Hamilton, DepoMed's vice president of finance and CFO. "BMS will be responsible for further development activities for this product," continued Hamilton.

DepoMed's Gastric Retention ("GR") System is based on controlled delivery technology which allows multi-hour delivery of an incorporated drug continuously into the stomach cavity, either for prolonged, local action, or for enhanced absorption stemming from multi-hour flow to the duodenum and upper intestine. The GR System is designed to allow once-daily dosing of drugs which normally require two, three or four-times daily oral administration.

During the first quarter of 1998 DepoMed announced an agreement to evaluate a pharmaceutical product for the R. W. Johnson Pharmaceutical Research Institute, a Johnson & Johnson unit. This project involves development of a controlled release product for an orally administered J&J drug in DepoMed's GR System. During the first quarter DepoMed initiated development work on the J&J product in its laboratories.

DepoMed increased its spending on research and development on its own behalf during the first quarter of 1998 compared to the same quarter of 1997, resulting in increased operating expenses. Also contributing to the increase in spending, was the Company's increased efforts in the area of business development as it seeks additional pharmaceutical partners for joint product collaborations.

The Company also announced the closing of an $8 million private placement of common stock during the first quarter of 1998. Combined with the funds raised in DepoMed's IPO in November 1997, this recent financing enables the Company to strengthen its R&D and administrative infrastructure to take advantage of additional identified product development opportunities. The Company also anticipates moving to larger facilities during the second quarter of 1998.

DepoMed, Inc., a development stage company, is engaged in the development of new and proprietary oral drug delivery technologies. The Company has developed two types of proprietary oral drug delivery systems, the Gastric Retention System, designed to be retained in the stomach for an extended period of time while it delivers the incorporated drug or drugs, and the Reduced Irritation System, designed to reduce gastrointestinal irritation, a side effect of many orally administered drugs.

The statements in this press release that are not historical facts are forward-looking statements that involve risk and uncertainties, including fluctuations in operating results and risks associated with the development of products, technological changes, FDA and other regulatory approvals, dependence on and need for collaborative partners, competition, uncertainty relating to patent and proprietary rights and other risks identified in the Company's registration statement on Form SB-2 (File No. 333-25445), annual report on Form 10-KSB and other filings with the Securities and Exchange Commission. Actual results, events, and performance may differ materially. Readers are cautioned not to place undue relevance on these forward-looking statements, which speak only as of the date hereof. The Company expressly disclaims any obligation or undertaking to release publicly any updates or revisions to any forward-looking statement contained herein to reflect any change in the Company's expectations with regard thereto or any change in events, conditions or circumstances on which any statements are based. 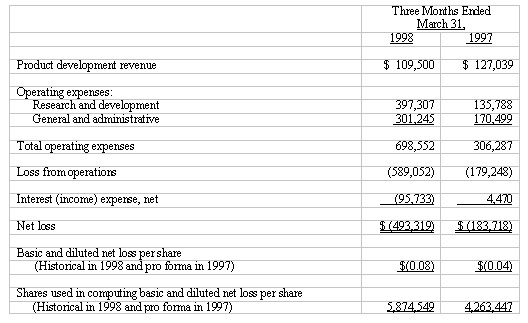 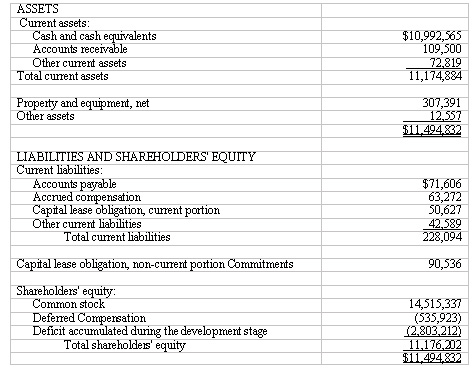